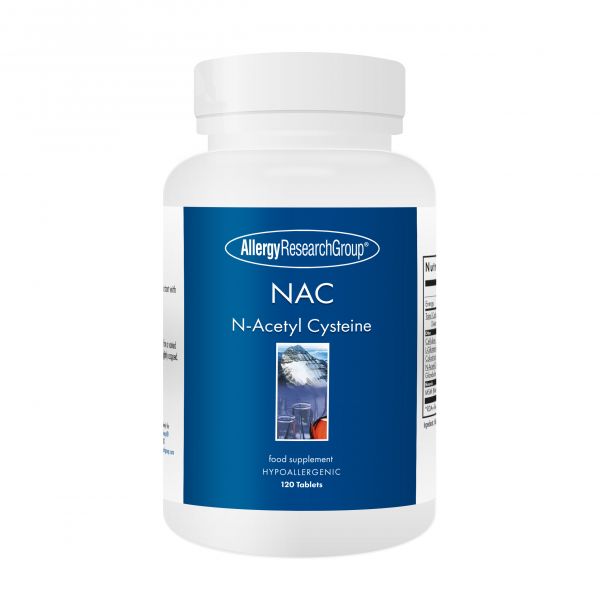 Skip to the beginning of the images gallery
BESTSELLER

NAC, the acetyl derivative of L-cysteine, is more stable than L-cysteine, and can convert into L-cysteine after being absorbed. NAC is a natural source of sulfur for metabolism, and an antioxidant that supports glutathione synthesis. Free form amino acid, high purity, well tolerated, and in tablet form to insure potency.

Add to Wish List
Share
Facebook Twitter Pinterest
This information is for education purposes only. Patients should consult with a qualified healthcare provider before making decisions about therapies and/or health conditions.
Food supplements should not be used as a substitute for a balanced and varied diet.
Grape Pips Proanthocyanidins x 90 Capsules Next

N-Acetyl-L-Cysteine (NAC) is a premier antioxidant, antitoxin, and immune support nutrient. NAC is a derivative of the amino acid L-cysteine, and is a dietary precursor to reduced glutathione. Glutathione, cysteine, and NAC are sulphydryl (-SH) substances, which play crucial roles in the body’s natural antioxidant defences.

Antioxidant activity is important to homeostasis and to normal metabolism. NAC has superior bioavailability compared to glutathione and cysteine. As potent antioxidant free radical scavengers, the natural sulphydryl (-SH) substances can readily donate electrons, which makes them able to combine with, and thereby neutralise, a great variety of potentially toxic, reactive substances.

These -SH substances can also help protect against radiation damage, which is largely mediated by free radical formation. They are important physiological antitoxins, and are valuable for optimal immune function

As a precursor to glutathione (GSH), NAC is an excellent biochemical resource for aiding detoxification of environmental toxins (xenobiotics). It may contribute by supporting the mercury, lead and cadmium clearance from the body, NAC may help to buffer these heavy metals.

Reduced glutathione has long been recognised to play an essential role in immune function, especially via its antioxidant/reducing properties.

GSH may contribute to lower mucus viscosity, so that the lungs may be cleared more easily.

GSH levels in the various organs can decline with age, and NAC may contribute to the amelioration of GSH deficiencies related to aging.

Oral supplementation with glutathione appears not to be the best means for repleting the body’s glutathione levels, since it is largely broken down by intestinal enzymes and comparatively little is absorbed intact. NAC, on the other hand, appears to be an excellent dietary starting substance for building up reduced glutathione.

NAC is well tolerated and well absorbed, and is also more stable than its non-acetylated relative L-cysteine, which has a tendency to “auto-oxidise” (break down spontaneously within the gut and body).

Suggested Use: As a dietary supplement, 1 tablet one to three times daily, or as directed by a healthcare practitioner.

As a food supplement, 1 tablet per day.